So, my husband is the money guy in our household. I spend it, he saves it. He's pretty darn good at it too. Used to be, he'd get money for his birthday and put it in the bank, so when Tristi asked me to look at this book, he came to mind right off the bat.
Unfortunately life took a few twists that have made it difficult to get him to write this review, and thus, me being the writer of the family, I am doing it for him based on our conversations about this book.
A bit of info about Retirement Quest from the back:
"RetirementQuest: Make Better Decisions was written by a CERTIFIED FINANCIAL PLANNER™ practitioner who has been counseling clients since 1992. Drawing from his twenty years of experience, John Hauserman has developed a unique ability to communicate complex financial subject matter in easy to understand terms. Readers are guided through the basics of financial planning, while threads of politics, history, and psychology are woven together to create a tapestry of deeper understanding into the financial planning world. Complete with hard hitting insight into the practices and sometimes abuses of the financial services industry, John has created a masterpiece designed to help those responsible-minded investors who are seeking to avoid common planning mistakes."
Now Gary (my husband) has gone back to school in the past year or more to get his CPA and MBA. This is the guy who used to tutor calculus in college and teaches teens how to do advanced mathematics and bring their grades from F's to B's. He just thinks in math. (In case you're wondering what a math lover and a writer are doing together, we both have a passion for music that transcends earth.) This book has been totally up his alley and he is already putting some of the things he has learned into practice.
A few of his words when I asked him about the book: "It's awesome! It makes me look at retirement in ways I never did before." "Yeah, I'd totally recommend it to anybody. The concepts are easy to understand and he does a good job with the writing." Unfortunately, being the man of few words that he is, that's about all I could get from him. So--I'm not sure if the experiment was a success or a failure, though if this book helps our future as much as Gary seems to think it will, I'll consider it a success, no matter how little writing he did. What can I say? I love the guy anyway. :D
The Author's Website
Purchase the book HERE
Posted by Karen E. Hoover at 12:32 AM No comments:

Book Review: A Woman's Power by Fay A. Klinger 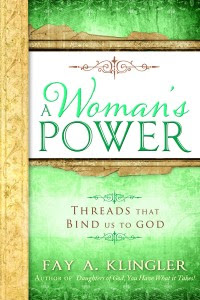 I have found so often that the Lord brings things into my life when I need them most desperately.
This book is one of those things.
At the end of chapter two, I read the following:

“Live up to the great and magnificent inheritance which the Lord God, your Father in Heaven, has provided for you,” said President Gordon B. Hinckley. “Rise above the dust of the world. Know that you are daughters of God, children with a divine birthright. Walk in the sun with your heads high, knowing that you are loved and honored, that you are a part of his kingdom, and that there is for you a great work to be done which cannot be left to others.” (Color changed for emphasis)
I will admit, I've felt rather powerless and worthless in many aspects of my life for several years now. Many of you know that my children were adopted from a difficult situation and dealt with multiple types of abuse. They are good children at heart, but struggle so much with certain impulses that at times I've wondered if they would end up going on missions and making a difference in the world, with all the good I see in them, or if they would end up in jail, having given in to the temptations that seem to drive them.
That's pretty hard on a mom. I know their problems are not my fault. Not really. In my head I know that, but sometimes I forget. I forget that I am supposed to be a writer and a teacher and feel as if I fail there as well.
Well, according to Fay Klinger and President Hinckley, that simply is not true. I am not a failure.
This book outlines a path to belief in ourselves and our Heavenly Father, and gives us tools to grow closer to him and become empowered through HIS power. It was very enlightening. Though designed for women, I think many men would benefit from this book as well. Truth is truth and remains genderless.
I'm not going to give you a full account of what this book is about, because I want you to read it for yourself and gain the power that only God can give. It is definitely from an LDS perspective, but I would imagine that most Christians would benefit from the reading and would have no trouble wading through the things that differ slightly from their own beliefs.
This book touched me--it moved my soul in ways I can't even begin to describe, and for the first time in ages, I feel a spark of power within me. I can do this. I have a calling that no one else has--several of them, actually--and it is time to fulfill them.
Thank you, Fay. This book was beautifully written with wonderful stories, interpretations of the scriptures, and words of counsel to put me on a path of understanding. You've got two thumbs up from me.
Link to the author's Website and sample chapter
Purchase Link
Posted by Karen E. Hoover at 1:04 PM 2 comments: