My Aura is blue

Attack of the Killer Computer

I'm sure you guys are dying to know where I've been lately. Well, my blog title probably gives you an idea. My computer has had one problem after another until I finally reformatted and caused even more problems, including the fact that it no longer recognized my ethernet card. I wanted to write, but it's kind of hard with a rebellious computer. Today I've spent reinstalling all the software I need so that I can get back on track.

I've had a few fun days in all the chaos. My friend Jill (Hi Jill!) kidnapped me on Friday, took me to her salon and paid for a wonderful cut and style, including a luscious scalp massage. It was awesome. After that she took me to lunch and to the new Cheesecake Factory for dessert. I had the most AMAZING piece of cheesecake there. I think it was called something like "apple caramel streusel", only it was longer. Every bite was sheer bliss. I told Jill that getting fat never tasted so good. lol She took me home for a couple of hours and then kidnapped me AGAIN, blindflold and all, for an early birthday celebration with some of my favorite people. I was supposed to stay overnight, but nobody told me to get off work on Saturday, so I couldn't. I was bummed, but it had been such a wonderful day that it was okay.

So, today is my 37th birthday. I remember turning seven years old on November 7th, 1977 and how cool I thought that was. It's not quite so cool to be turning 37, but still neat that I've got 37 happening on 11/07/07. I don't know why that tickles me, but it always does. Not much going on today for a celebration except that I've had most of the day to myself, which has been nice. I'm about to the point now I can start writing, but the kids are out of school early, and I promised to make manicotti for dinner. I know, I know, I should probably insist on being taken out to dinner, but the fact is, I like my own cooking better than any of the restaurants around here. I haven't had manicotti for years and very much look forward to sharing its flavors with my children. This will be their first experience with it.

So, Dad is off with the kids to find me a present and Grandma already asked me what I wanted and purchased it yesterday-the new disney movie Ratatouille. LOVE it! Hopefully my computer will keep breathing for a while now so I can catch up on my writing. I've missed you guys!
Posted by Karen E. Hoover at 2:26 PM 10 comments: 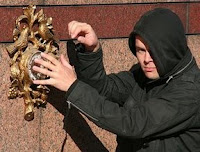 Is anybody else feeling like this? I swear, yesterday it was Independence day and now I'm less than a week from my birthday, which is another reminder of the time thief. Sheesh.

I really did intend to come back on the 20th and write a blog. Really, I did. I guess I let all the extra hours I've had to work and my need for sleep get in the way. It truly seems like I've had not a minute to spare the entire month of October. Maybe that's why it feels as if time has disappeared.

On another note, I signed up for NaNoWriMo,--as if I don't already have enough to do. For anyone who doesn't know, NaNoWriMo stands for National Novel Writing Month. It's a challenge to write 50,000 words in one month starting November 1st. That averages out to 2,000 words perday, excluding Sundays with one day to spare. I haven't written yet today, because of that need for sleep I mentioned earlier, but as soon as my kids hit the hay in about 20 minutes, I'm off to start. I'll put up a tracker to let you guys know how I'm doing. Wish me luck!

Quote of the Day: "If a story is in you, it has got to come out."
- William Faulkner