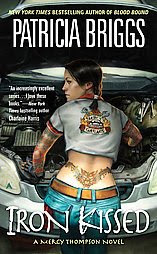 It's been a very long time since a book has sucked me to the point that I wanted to do nothing but READ for days on end (well, except for my friend Ali's book, but that's another story). When Gary and I decided to go to the beach for our anniversary trip, I told him I didn't want to rent a car. I didn't want to spend the time running from place to place, trying to get all the sight seeing in before we left. The only thing that would accomplish was to send me home more tired than I was when we left. I wanted a truly relaxing vacation doing absolutely nothing.

So that is what we did! We spent our days lounging around in the condo or on the beach. We walked to the 7-11 for bottled water and basic supplies and eventually walked two miles to the closest grocery store and another two miles back. It just about killed me but I loved (nearly) every moment of it. It was awesome finally stepping back long enough to breathe and watch people, to notice my surroundings.

After a while I started looking for more ways to relax and picked up my kindle2 for a good read. I'd found a book a while back that I'd read a sample chapter from and was very intrigued. Not only was it a fun urban fantasy with a great main character, but the voice of the writer was just the kind of thing that resonates with me--and the story takes place in a city close to my heart as my grandfather homesteaded there back in the 40's and my mother graduated from high school there. It's one of those places that is more home than most because of the family history. I started school there as well. It was a place of refuge after my father passed away.

It's the Mercedes Thompson Series by Patricia Briggs (Moon Called, Blood Bound, Iron Kissed, and Bone Crossed) and takes place in the Tri-Cities, Washington. It's a world full of werewolves, vampires, Fae magic, and one half native american woman who is also a shapeshifting coyote. They call her a "walker."

Briggs is brilliant with chracterization. She has a way of making these people alive, more alive than many people I walk amongst. She creates individuals I want to be friends with, who I'd invite into my home and stand next to in a fight. People who make a difference.

If you're looking for a rip-roaring ride through an alternate reality, check out Patricia Briggs. She'll be sitting on my shelf next to my other favorites that I'll read time and time again. Mercedes Thompson is definitely someone I want to share more time with.

Quote of the Day: "A classic is classic not because it conforms to certain structural rules, or fits certain definitions (of which its author had quite probably never heard). It is classic because of a certain eternal and irrepressible freshness.
Edith Wharton (1862 - 1937)
Posted by Karen E. Hoover at 1:31 PM 5 comments:

And the waves washed over me 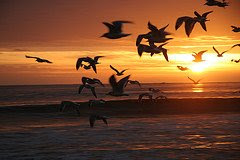 My honey and I are on a week long visit to Sunset Beach, California for a belated 15 year anniversary trip. We got here yesterday and discovered the ocean is literally over the hill from our condo. I've never been in the ocean. I've seen the Atlantic once, when I was a missionary in Rhode Island, and the Pacific a couple of years ago when we drove down the Oregon coast, but I have never stood in the water, not even a single toe.

It's amazing the things nobody ever talks about when they rave about beaches and the ocean. My idealized vision of visiting the ocean consisted of walking hand in hand with my sweetheart through the satin sands, dancing away from crashing waves while a gentle breeze tossed my hair. Today, Gary said "I'll bet the ocean would help your back," as he's knuckling my shoulders into subservience. Cringing, I squeaked, "okay," willing to do anything to make the pain stop.

We were on our way shortly and the first thing I noticed being different from my idealized vision of the ocean, was that sand is awfully hard to walk in. I finally understood the whole "shifting sand" phrase. By the time we reached the water I was huffing and puffing and my feet hurt from all the jagged bits of seashell scattered through the sand. We tossed down our towels, then chased them because the "gentle breeze" could compete with gale winds in my hometown. "Stiff Breeze" took on new meaning when my hair stood out straight behind me or whipped around to snap me in the eye.

With our towels weighted down by shoes, we finally made our way to the water, my feet still stinging from the beach sand. We crested the final hill and saw the majesty of the ocean. It was every bit as beautiful as I though it would be . . . until the massive bits of seaweed rolled onto the beach right before my eyes. I hadn't expected seaweed. I don't know why. It just hadn't occured to me that seaweed might be found on the beaches. Silly me.

My heart started pounding as we neared the water, Gary's hand in mine, a huge smile splitting my face. The water surged up and nibbled at my toes, my eyes widened. It felt marvelous, except . . . nobody had ever mentioned how water and sand are so pervasive they will go anywhere. The grit flowing under my toenails surprised me, but I quickly got over it and stepped deeper into the water. The waves crested, the frothy white tops curling down and smacking into my knees, then spread across the sand. That was fun, so I went deeper, and deeper until I could barely touch the sand on my tippy toes. A grin was spread across my face from ear to ear. I was happy.

And then a monster wave rushed toward me. My heart raced a bit, but I thought, I can handle this. I readied myself and jumped just before the wave hit. Only, I can't jump THAT high. The wave slammed into me, engulfed me, body and head and shoved me toward the shore, where I stumbled in the sand and fell to my knees. I started to laugh, kneeling in the sand, when another wave smacked me from behind. I came up sputtering, still laughing and was hit again, and again, and again, until I was coughing, spitting out salty water (another thing I hadn't envisioned. The ocean is salty? Really??), and STILL laughing. I couldn't help myself. Finally my husband came and offered me his hand. I was laughing so hard I couldn't stand. My legs wouldn't work. The ocean had just about drowned me and it was freaking hilarious!

So, what did I learn today?
1) The ocean is powerful. I am in awe of the overwhelming force of it.
2) Never turn your back on a wave. They take advantage of you. Yes, I do belive in water nymphs. Do you have a problem with that?
3) Sand is migratory. Enough said.
4) Remember to laugh. It feels better than anything in the world.
5) Sunset Beach really IS all about the sunsets. Talk about AMAZING.
6) It has been MUCH too long since I had my last vacation.

Quote of the Day:The pages are still blank, but there is a miraculous feeling of the words being there, written in invisible ink and clamoring to become visible. ~Vladimir Nabakov
Posted by Karen E. Hoover at 10:26 PM 12 comments: 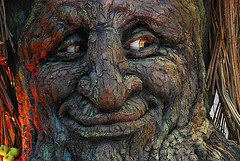 My heart hammered in my chest harder than it ever had. Putting on a burst of speed, I rounded each corner tight, racing down twelve flights of stairs, and didn’t trip until the very bottom. The heel of my shoe caught in the metal grating and threw me forward, my head cracking against the metal door. I opened it with shaking hands, hardly feeling the bump on my head, and slammed the metal slab behind me, then leaned against it trying to catch my breath and calm the shakes.

When my heart slowed enough to hear, I put my ear against the door and listened. It was silent for a long time, then a soft hissing started, a lot like that of sand in the desert when the wind blows, piling it wherever it can. It grew louder until it chipped at the metal door. A soft squeal sounded and the door flared hot under my ear. I pulled away, quickly backpedaling down the pipe laden tunnel behind me. A few clouds of what looked like green pollen surged from beneath the door and paused, almost as if they sensed me, then rolled my direction like dandelion puffs on the wind.

I threw off my shoes and ran full force down the tunnel, listening for the sounds of people ahead of me, the broken concrete biting at my feet, but I didn’t have time to stop. Something was wrong. Something was very, very wrong and my heart told me I had to hide from the pollen or I would end up just like the tree man and sagebrush family.

Finally I heard cries and panting ahead of me. I put on a burst of speed, too scared to even glance over my shoulder to see if the cloud was still there. I tucked my chin and pumped my arms as the concrete gave way to moist dirt and moldy smells.

I almost passed them. If it hadn’t been for Auntie Chieko’s voice I probably wouldn’t have caught the door in the dim passage. I slowed and spun, racing back toward her voice. The cloud seemed to be gone, but there was no point in taking chances. I dashed through the door, threw it closed behind me, then pulled off my slip, knelt, and stuffed it into the gap.

“What are you doing?” a panicked voice came from the back.

“It came under the door. I have to block it. Didn’t you see what that stuff can do?” My slip wasn’t stretching far enough. It only covered half of the gap and I had nothing else to stuff under it without stripping. I was seriously considering it when someone knelt beside me.

“No, but I can imagine. I mean, think Hiroshima, dude,” the skinhead said. He pulled off his overshirt and shoved it beneath the door.

Principal Robertson pushed his way through the crowd of ten people. “That’s ridiculous. There’s no such thing.”

“Do you want to go tell that to the tree that just sprouted in the middle of ? It’s a magic bomb. Sir.” I remembered my manners at the last minute. “Go ahead and think I’m crazy if it makes you happy, but I saw what I saw. That wasn’t an atomic bomb or a nuclear bomb. It moved too slow and it didn’t look right, not like the pictures and movies I’ve seen. It was slow, like . . . like . . .” I just couldn’t find the words, but wasn’t sure if it was because of adrenaline, fear, or my stupid brain. Frustrated I stood and spun. “It was like watching pollen moving in the wind, but it’s no kind of pollen I’ve ever seen. It followed me. It’s like an allergy disease or something.”

Somebody snickered in the back. They all stared at me like I’d grown another head. I couldn’t blame them, not really. I knew how crazy it sounded, but I’d seen what I’d seen and I couldn’t say it was a lie. It wasn’t a lie. It was truth.

Newtimber had just been hit with a Magic Bomb. A bomb dropped by a dragon.
Posted by Karen E. Hoover at 11:29 AM 6 comments: 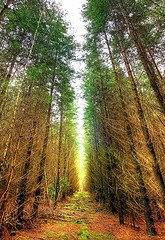 It's my 15th anniversary today. Happy Anniversary to me!
Posted by Karen E. Hoover at 9:51 AM 4 comments: